A short text to describe your forum

This thread is dedicated to prove wrong several statements made 9 years ago by prominent member of forums and Shivanna fan, Praveen also known by forum-usernames like Shiva, Hattrick Hero, Mylari. Some of those statements and/or arguments that were raised across two forums include or basically translate/summarize into following points:

1. Shankar Nag had only 1 or 2 100-days movies.
2. Shankar Nag never gave big hits. Especially no big solo hit. His hits were all just 6 to 10 weeks movies with very minimal profit to producers.
3. Shankar Nag's Sangliyana movies had just one theater All Over Karnataka in their 8th week. Sangliyana movies ran just 8 to 10 weeks only in Bangalore & nowhere else.
4. Shankar Nag was not a big star. His popularity or BO pull was not in the level of Vishnuvardhan and Ambareesh.
5. Shankar Nag was a Prajwal Devraj level of hero in terms of box office, popularity, fan following (which means) the difference between big stars of that time and Shankar Nag, was/is same as the difference between 2011's (or today's) big stars and Prajwal Devraj.

The following data will prove wrong all the above points. I was challenged that first of all I will never find authentic posters and proofs or fans who have maintained data on Shankar Nag movies' box office runs. I have collected some authentic proofs and I am myself a fan - so that statement is put to rest. I am going to prove that 6 films of Shankar Nag ran 100 days in one or multiple centers in the span of 12 years ranging from 1978 to 1990. Number of 100 days films given by Shankar Nag during this period is arguably same or more than Ambareesh (People are welcome to list Ambareesh's 100 days films during this period - but with valid proofs). Further, most of these hits will qualify as BIG HITS i.e., Super Hits or Blockbusters based on the number of centers in which they ran 100 days. 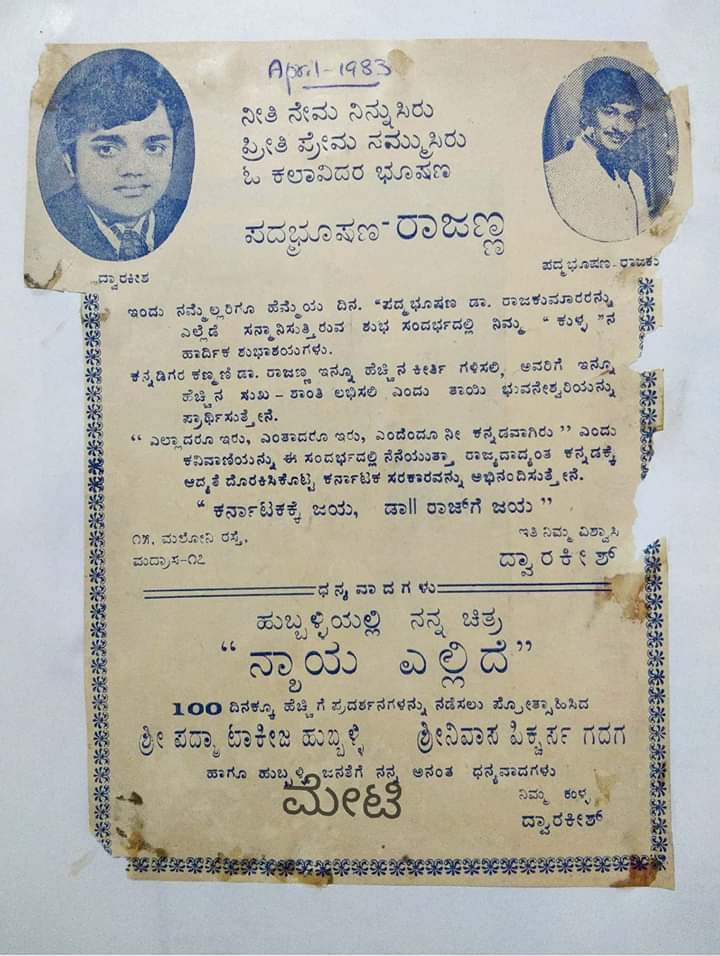 (Please Note: if this movie cannot be considered as part of Shankar Nag's hits since it was a multi starrer also starring KFI's biggest ever Superstar Dr. Rajkumar - then we should also not consider Gandhada Gudi for Vishnuvardhan and Odahuttidavaru for Ambareesh.)

Proof (of course, this doesn't need proof, but still posting): 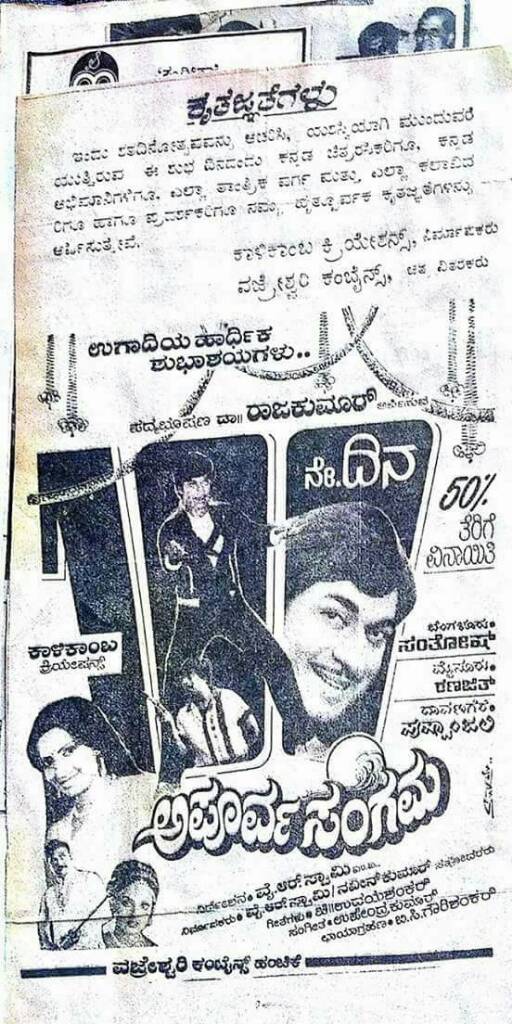 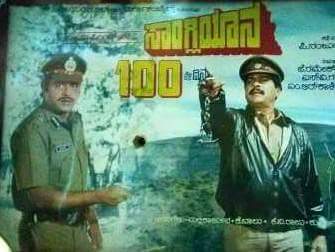 Proof 2: you can find 100 days momento's of both Sangliyana and S.P. Sangliyana Part II in Chikmagalur - Milan theater. since we can find 100 days momento of this movie in a side center like Chikmagalur, it can be guessed/assumed that it might have ran 100 days in couple more theaters/centers.

(During that time, paper ads used to come area wise until 100 days. NK used to release much later. Bangalore ads used to be separate from the rest of the centers. Same is the case with many Dr. Rajkumar, Ravichandran movies posters which list only one or two centers/theaters in their post-8th week posters. If disputed I will share those posters also to prove this point.) 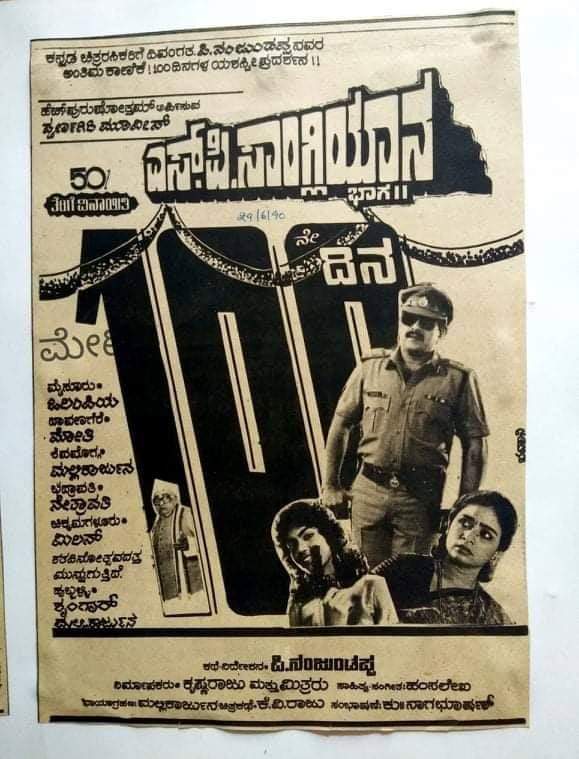 Producer-Director of Tarka, Sunil Kumar Desai, has explicitly stated that movie opened to packed houses selling black tickets on its release day across theaters like Sapna, Prasanna, Uma in Bangalore, and other centers, and went on to have 21 weeks run at Sapna and 100 days run at multiple centers (22 as per him). Watch the below video from 21:20 to watch and listen to Sunil Kumar Desai's statement:

Further, Uppi also spoke about this movie running 100 days in when he came on Weekend With Ramesh.

Now let us look at all the points that were raised and compare them with above proven facts:

1. Shankar Nag had only 1 or 2 100-days movies -
he had atleast 6. Same as or more than Ambareesh. Further it has been read/heard that few more movies ran 100 days like I Love You, Moogana Sedu, Thaaliya Bhagya for which there are no valid proofs as of now.

2. Shankar Nag never gave big hits. His hits were all just 6 to 10 weeks movies with very minimal profit to producers -
Seetha Ramu, Sangliyana series and Tarka were super hits which ran 100 days in multiple centers and fetched big profits to producers, other than many other 50 days+ hits which fetched good profits like Auto Raja, CBI SHankar and many more.

3. Shankar Nag's Sangliyana movies ran 8 to 10 weeks only in Bangalore -
both movies ran 100 days in multiple centers outside of Bangalore.

4. Shankar Nag was not a star. His popularity or BO pull was not in the level of Vishnuvardhan and Ambareesh -
Shankar Nag's count of 100 days movies is same as Ambareesh. In fact Shankar Nag became a star much before Ambareesh started acting in lead roles before which he was mainly doing negative/side roles. Due to this very reason Antha was first offered to Shankar Nag which was rejected by Shankar Nag as per Rajendra Singh Babu. Shankar Nag was even more consistent than Vishnuvardhan during the period of 1978 to 1983. Will post more on this comparison in detail later.

5. Shankar Nag was a Prajwal Devraj level of hero in terms of box office, popularity, fan following -
Name one film of Prajwal Devraj which ran 100 days in multiple centers like Seetha Ramu, Sangliyana series and Tarka.

Hence it is proved that Shankar Nag was a big star in the same level as Ambareesh, had atleast 6 100 days movies, gave super hits that ran 100 days in multiple centers, and was definitely not a hero of Prajwal Devraj's tier.

PS: Nothing against Prajwal Devraj. He also, like other actors, has contributed his own share to KFI. But categorizing a legendary big star like Shankar Nag in the same level of Box Office ranking as a non-star hero (with all due respect) is not at all fair, and speaks volumes about the person's lack of knowledge and lack of respect to a legendary star actor-filmmaker.
Top